He is the only family member to be still (rumored) alive besides his father.

He isn't the protagonist in the main game. He killed his sister Mya by accidentally bumping her off the roof in stage 5 of Hello Neighbor Hide and Seek.
Aaron Peterson, otherwise known as The Neighbor's Son or The Brother is the son of Theodore Peterson and Diane Peterson. While it may not seem like it, he cares about his father a lot. Aaron is also the "antagonist" of Hello Neighbor: Hide and Seek, where he tries to beat his sister Mya Peterson in games.

Aaron is 13 years old. He has a light pink shirt with a white collar and striped blue shorts. His eyebrows and nose resemble his father's and he has blue sneakers. He has brown eyes, which his parents do not have. It is unconfirmed who these eyes are inherited from.

In Stage 1, Aaron is in a tiger costume, clearly made by him. He has drawn on whiskers and the shirt says "GITER", following on to the mixed-up language the game has ("Wayron Croobian", as the fans like to call it).

In Stage 2, Aaron is wearing a police uniform, complete with the hat and badge.

In Stage 3, he seems to be in a handmade fire costume with a paper fire hat and dirt around his eyes.

In Stage 4, he is now a hunter/guard. He has a toy rifle and one of the overall straps fell off. He has a drawn on beard and a hat.

In 1991, Aaron Peterson and his family moved into Raven Brooks due to an accident that happened in Germany. He made friends with Enzo Esposito and Enzo's friend Trinity Bales. His sister became friends with Maritza Esposito and Lucy Yi. Aaron is informed of the rumor going around about Forest Protectors. At the time, people thought Forest Protectors were bird-human hybrids who lived in the woods. A group of kids went missing one time after going in there. During a trip to the Golden Apple Factory, Aaron realizes his dad is making a new amusement park.

One night on Halloween, Aaron's friends wanted to take a shortcut through the woods to get to the Raven Brooks high school, which had big candy bars. Aaron got lost in a storm however, and stumbled upon a Weather Station. Inside, he found some stuff relating to his grandparents, but hid because someone was coming. He thought it was a Forest Protector, but it turned out it was his dad's friend, Ike Gershowitz. He took Aaron back to his family's house and lied to Theodore that Aaron was near the Natural Grocer.

After going back to the forest, this time with Mya, they came back to the house late at night alone. They were grounded by their dad for being in the forest so late.

Later, Aaron heads back to the Weather Station and finds a tunnel beneath it. He finds Ike's wallet with blood on it, and after thinking he saw Ike in front of him running away, he found a nest. Aaron climbed up the tree and to the nest, but fell and got knocked out.

Aaron wakes up in a hospital, no one being concerned on why he fell out of a tree. He notices he lost Ike's wallet.

Back at home, Mya is mad for Aaron not letting her go with him. (Work in Progress)

Aaron becomes friends with the kid across the street, Nicky Roth. They both have a talent for lockpicking and creating stuff. Aaron leads Nicky to the Golden Apple Factory, showing him some cool rooms. He keeps the Golden Apple Amusement Park tragedy a secret from Nicky, but Nicky finds out later. A couple months later, Aaron's mom dies in a car crash and Aaron gets upset. He pushes Mya off of the roof of the house on accident while trying to play a game with her. He gets locked in the basement by his dad, who doesn't want his last family member to die. Theodore feeds and cares for Aaron and still loves him.

Theodore leaves clues for Nicky, who later gets in the basement to save Aaron. He finds Aaron and Aaron tells him that Nicky is only gonna be stuck here so he can have a friend. Aaron does not want to leave the basement or get revenge on his dad.

2 months later, Aaron frees Nicky from a room and distracts Theodore so Nicky can escape. It is unknown what happened to Aaron.

Aaron is somewhat of an eccentric child, who, similar to Nicky Roth, enjoys tinkering and causing havoc in the neighborhood they live in. The enjoyment of tinkering may be the result of Theodore Peterson - his father - who happens to be a theme park designer and an engineer. During the gameplay of Hide and Seek, Aaron will attempt to catch the player (Mya Peterson) while they are in search of stuffed animals. If caught one too many times, Aaron will begin to take the stuffed toys out of the bin the player needs to fill one by one. After the death of his mother, it is implied to have taken a major toll on him. He started becoming more aggressive. He does things like steal his sister's spoon and push her. It eventually comes to the point that he kills his sister out of frustration (accidentally) by pushing her off of the roof of their house. And then completely giving up In the third book and blaming himself, calling himself a "monster" when Nicky tries to save him.

Aaron is shown to live with his father, Theodore, his mother, Diane, and his younger sister, Mya. 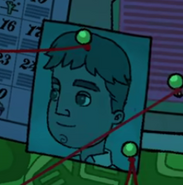 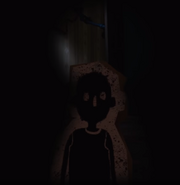 Beyond the barriers in a dream.

Aaron on one of the teasers with Theodore and Mya. 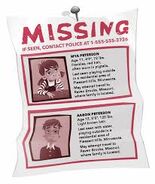 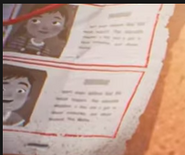