Alpha 2 is the 5th build of Hello Neighbor that has been released and is notably the first public build that has an explore-able basement. It is the second build, and first publicly available, to introduce a player model. The first being Alpha 1.5. The map is much more developed and includes a graveyard and a small lake. Versions of the protagonist’s old house from Alpha 1 can also be seen around the map.

The beginning starts off with Nicky Roth driving to a new neighborhood. He moves into a derelict-looking blue house. Nicky opens the boarded-up front door, moves his stuff inside and takes a nap. After a while, the Neighbor appears out of nowhere, drugging Nicky with sleeping pills and throws him out of the house. There are some other scenes that include the Neighbor doing his random odd and mysterious hobbies, such as barricading and locking multiple doors and drinking a whole bottle of milk. Nicky wakes up outside on a blue couch, startled after hearing a scream and seeing the Neighbor fall backward after getting pushed by what appears to be a hostage. Nicky runs to the house and sees the Neighbor shut the basement door and lock it with the keycard terminal. The game starts with Nicky Roth entering the Neighbor's house.

You open the door, and a hat stand falls, and the Neighbor will hear it. You hide in a wardrobe to prevent him from seeing you. If you go anywhere else, it will trigger him again, then hide in a different wardrobe that is down the hallway. The Neighbor will start in Idle Mode and this seems to be the easiest as he doesn't go in Hunt Mode that much, however, once the Neighbor is in Attack Mode, it is very hard to get away from him as he is extremely fast in this version. You can explore the house but the only way for the game to start getting interesting is by getting the red key the Neighbor has on him. There are multiple ways you can do it. Tactic 1: This one is very cheap as you can just steal it off him while he is just in front of you. Tactic 2: This one is less cheap as you can take it off him while he is looking away. Tactic 3: The Neighbor loves milk, so you can get sleeping pills in the bathroom cabinet and put it in the milk. After he drinks the poisoned milk, he will soon fall asleep. Tactic 4: Don't get the red key, instead turn the generator in the backyard on, go to the "Open" switch, hurry up to the stairs after activating it and grab the electromagnet, bring electromagnet to the backyard to the window in the tool room and use it to get the lockpick. After doing one of these, you can open the red padlock. You find a crowbar and (if you haven't used the electromagnet route) a lockpick. The lockpick is used to open the shed located in the backyard (optional, and you cant use it if you did the electromagnet route). You can pick up the toy rifle to stun the Neighbor or to break windows for distraction. The wrench is used to open the locked ladder. Tactic 1: Do the stairway opening puzzle again and take boards off of the keycard room door and grab the keycard and get to the basement. Tactic 2: Climb up the ladder and fall into a hole in the roof. Pick up the keycard. Break out of the room to get the Neighbor distracted. If there is enough time, open the basement with the crowbar and the keycard. Enter the basement for the ending.

You enter the basement with intense music. You can see a shadow of, most likely a child (actually another version of the Neighbor as a placeholder) running for a split second down the stairs. After running down the stairs, you will enter a room. The room is filled with all sorts of objects found upstairs in Alpha 1, in specific, candles and ritualistic imagery surrounding a mannequin, a baby crib, a mattress/bed that someone was most likely in, a teddy and a few toy bricks. If you attempt to go through the door, you will get jump scared by the ending screen. The basement in Alpha 2 was the same basement used in Alpha 1.5. Unfortunately, most of the basement past the ending door cannot be seen unless using the ghost cheat to ghost through the door. The rest of the basement can now be explored by walking. It is unknown why the whole basement was not used in Alpha 2. However, it is most likely because the basement chase sequence with the Neighbor in Alpha 1.5 was scripted.

*If You pick up and left somewhere Neighbor's TV he will come pick it up and he will put it into it's place.

*If you open the basements door the Neighbor can walk into it in the hunt mode.

*But he will not teleport into the na basement

*If You Press "M" the Alpha 1 menu will show with russian translation, but it don't work.

*It Was left until alpha 4 came out

*The Sleeping Pills are back in the act 2 nightmare, but they aren't an pickable item

*Into the cutscene where neighbor is trying to catch the kid, the kid has a model of an mannequin. And also The Neighbor says his first Actually word it's *queit*

(if we don't count the Prototype where the neighbor was swearing)

The Neighbor can ps floor, 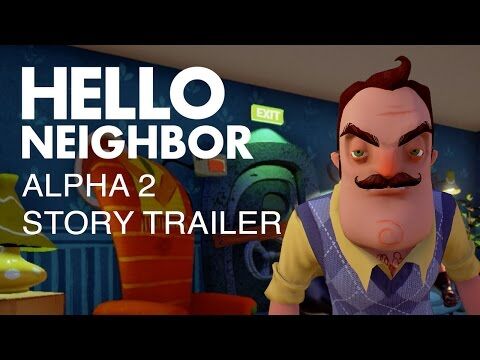 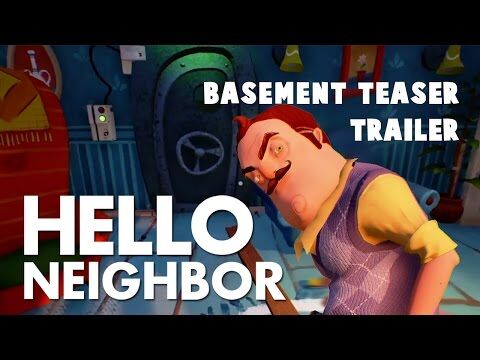 Left side of the Neighbor's house.

Right side of the Neighbor's house.

Backyard of the Neighbor's house.

The Neighbor's house in the tutorial. 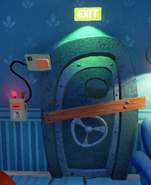 The lost and found box.

Stairs to the second floor blocked by a false wall.

Stairs descend downwards into the basement.

The first room in the basement.

A mattress/bed and a teddy.

The door that ends the game.

The ending screen.
Community content is available under CC-BY-SA unless otherwise noted.
Advertisement