-Contains only about 40% of the game

9
Beta 3 is the version that came out just a couple months before the final version came out. It features The Neighbor's birthday and is nearly identical to Alpha 4. It is the tenth and final Early Access version of the game.

Unlike Beta 1-2, Beta 3 is more refined. Many rooms now look different. The house has 8 floors and 20 rooms (in Release, in Act 3 - 24 rooms). The windmill has been changed too. they added a command console but it broke. 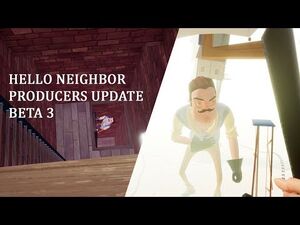 Mr. Peterson locking up the Basement
Add a photo to this gallery
Retrieved from "https://hello-neighbor.fandom.com/wiki/Beta_3?oldid=30509"
Community content is available under CC-BY-SA unless otherwise noted.