Delaying the Neighbor from opening doors.

Chairs are important objects in the Hello Neighbor series.

First appears in the Prototype Trailer. This is an ordinary chair with four legs and a back.

Has a different model. In the Neighbor Test House, in the kitchen you, can find a new kind of chair.

Among the rubble you can find a new intolerable version of the chair.

Adds chairs with a new look, but the old ones have not been removed.

Some chairs can be found in the guard building but they are useless.

They have the same usage as in Hello Guest Alpha 1 but they are in different locations.

It is located in the bedroom, in the Closet Room (Pre-Alpha), in the garage, near the stove and among the things of Nicky Roth.

It is found near the grave, in the classroom, in the hall (second floor) and among the things of Nicky Roth.

It is found in Nicky Roth's Apartment No more changes.

It is found among the things of Nicky, in Nicky Roth's House, in the basement and in the final battle. No more changes.

You can meet in any act, in the house of Nicky Roth.

They are found in large numbers in Mr. Peterson's House.

There are several chairs in each stage.

Some chairs can be found in the guard building.

Several chairs are in Mr. Peterson's House, in the backyard there is a place where the spawn, also chairs are scattered around the map.

Unused Chair in the game files of the Pre-Alpha.

Chair in the Test House

Broken version of the Chair in the Test House 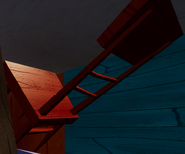 Chair in the Living Room in the Final Battle.

Chair in Fear School.
Add a photo to this gallery
Retrieved from "https://hello-neighbor.fandom.com/wiki/Chair?oldid=30070"
Community content is available under CC-BY-SA unless otherwise noted.