The Clown has the Ability to throw a Smoke Bomb which hinders the Kids Vision and slowly deals Damage over time. Smoke Bomb lasts for 20 seconds and the Cooldown is also 20 seconds.

When a Kid escapes the Clown's Grip, He (the child) is Blinded for 3 seconds, allowing the Clown to grab him, or use that time to grab another Kid, or stack up and beat down the Kid again. 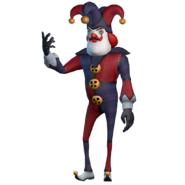 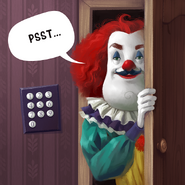 Add a photo to this gallery
Retrieved from "https://hello-neighbor.fandom.com/wiki/Clown?oldid=30432"
Community content is available under CC-BY-SA unless otherwise noted.