Teacher at the Raven Brooks

Hospitalized after car accident with her husband driving, later died in hospital.

Diane Peterson, also known as Mrs. Peterson, is the wife of Theodore Peterson and is the mother of Aaron and Mya Peterson.

Diane Peterson was a nice woman. She was a kindergarten teacher at the Raven Brooks Elementary School. She sometimes questioned her husband's actions, but still loved him. As a former dancer, she sometimes danced with her daughter, Mya. She cared for her family. She kept a phone book by the kitchen window, which is where she smoked. She had a exercise book and watched volleyball on TV.

Diane has red hair and blue-green eyes. Her nose is small and she looks young. Her light blue dress has white polka dots on it and she wears yellow high-heels.

Diane and her family moved from Germany to Raven Brooks to escape an accident that happened. One day, they were questioned by two men who came to investigate the Germany accident. Diane welcomed them in but they left shortly after, yet keeping an eye on them. She decided to find a lawyer, but couldn't afford one. Due to the luck devices Theodore used, Diane was able to get a lawyer to help clear the Peterson's name.

In 1995, Diane met Nicky Roth, her son's best friend. She got worried once Theodore was talking to Mya about the human body.

Later, while Diane and Theodore were driving, they crashed into a truck, killing Diane. She had her funeral at Theodore's House, and Mya was not present, due to the funeral being shortly after Mya's death. 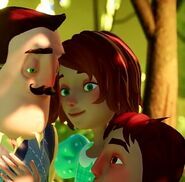 Diane Peterson's face from the trailer. 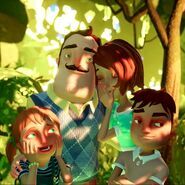 Diane Peterson on her bed.

Diane and Mya in the test pilot.
Add a photo to this gallery 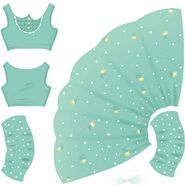 The texture of Diane's dress. 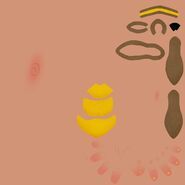 Diane's skin texture.
Add a photo to this gallery
Retrieved from "https://hello-neighbor.fandom.com/wiki/Diane_Peterson?oldid=31337"
Community content is available under CC-BY-SA unless otherwise noted.