Blocking the way to the player

Yes (Only in Alpha 1. Only the Neighbor can do that)

Doors are important objects in the Hello Neighbor series.

A door is a hinged or otherwise movable barrier that allows ingress into and egress from an enclosure. In Hello Neighbor, doors separate rooms in Mr. Peterson's House. In the Prototype, Pre-Alpha and Alpha 1, doors were made out of wood and have brass door handles. In Alpha 2, the doors became cartoonish. It has the look of a door made of several boards. The door and the frame also have loops to hang a lock on them. The doors themselves now began to look simpler and crooked. In the door, there were keyholes and slightly different handles of silver color. You can look through the keyhole.

In Alpha 3, the double doors were removed, as were all realistic. There is physics now for the door. At the same time, the sound of the doors changed. And there were orange doors. Except the coloring is no different. Red doors were also removed from the game. In the game there was a door with a yellow coloring - it's the basement door. In Alpha 4, all the doors became wider, and the red door returned, but it became wider. Now two orange doors began to make sense: If you open, and if you go into the room behind them, Nicky Roth will get into new locations. There are also doors that open either during the day or at night. And also there was a door from Nicky Roth's Apartment.

In Beta 1, keyholes were missing in all doors (despite this, keyholes can still be looked through). Also, the doors, opening at a certain time of day, are very stretched. At the door there was an approach, so that you could not see the seams of the floors near the rooms. In Beta 3, all the doors were fixed, as well as the door from Nicky Roth's Apartment that can be opened and closed, as well as a new door leading to the Nicky Roth's bathroom.

Two new doors appeared in the full game: One is a double door found in the nightmare in the hospital, as well as a door that is found in the main menu, in a nightmare with announcements, as well as the final door of the basement in Act 1. There are three new doors in Secret Neighbor: Double barn door: The double doors are made of many boards connected by nails with two loops at each door. Doors with electronic locks: They are highly secure doors with a wooden door frame. The door around is made of metal and wood. There is also an electronic lock in the door itself. Basement Door: The door is a modified door from the full game. However, it differs from the original door: it originally has three snaps and three loops. It's also interesting that it has a red door frame, as opposed to a brown one, as in Hello Neighbor (before the release the frame was white). The door is a transition to another room. The door can be backed with a chair to block Mr. Peterson, and the chair can be placed only on the side in which direction the door opens. If there is a lock on the door, it cannot be opened without the right key. Sometimes, the door can be closed just like that. Alpha 2 has an opportunity to look into the keyhole. This way, Nicky Roth can find out about the door without opening it.

It has a white or red coloration. Some of them may be locked or stooled. Others open under special conditions. There is also a door leading to the pantry in Alpha 1 and a door from the shed to Alpha 2, as well as a door to the second floor of Nicky Roth's House. There are doors in strange places:

White or red. Last time was in Alpha 2. You can open one or two at once. Alpha 2 is closed until the board is removed. In Secret Neighbor, there is a double door at the barn. You can't prop it up with a chair.

Appeared in Alpha 2. At first it was a door from the basement, but in the following versions became the door from the room with water.

The Alpha 4, the iron door became a little wider.

In Beta 1, the door was actually usable.

It has a brown color and a hole for letters. Appeared in Alpha 4. In Beta 1 became part of Nicky Roth's House. The new door model has been added to Beta 3. The similar can be seen in the room with the pool.

It looks like an ordinary chestnut-colored door with a protected protection attached (boards, iron). At first it was only in the release and it could not be opened, but later the door began to be used as a door to the basement in the game Secret Neighbor. It could only be opened when all six locks on the door were locked.

Alpha 1 rifle range door.
Add a photo to this gallery 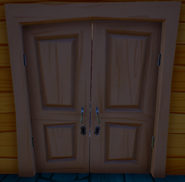 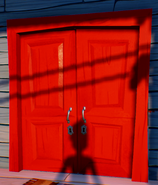 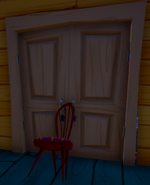 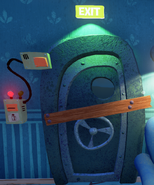 The basement door from Alpha 2.

Unused basement door from Alpha 2.
Add a photo to this gallery 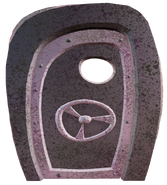 Iron door.
Add a photo to this gallery

The basement door from Act 1. 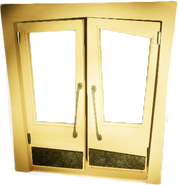 Door in the hospital.
Add a photo to this gallery

Gate Door in Hello Guest.
Add a photo to this gallery

The basement door.
Add a photo to this gallery 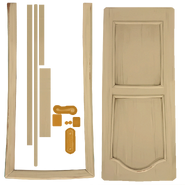 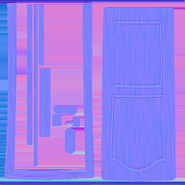 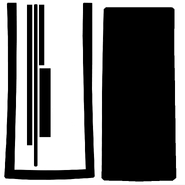 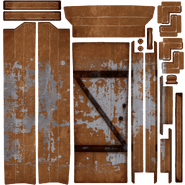 Add a photo to this gallery
Retrieved from "https://hello-neighbor.fandom.com/wiki/Door?oldid=30492"
Community content is available under CC-BY-SA unless otherwise noted.