Hello Neighbor 2 (also known as Late Night Shift and formerly known as Hello Guest) is an upcoming Stealth Horror Thriller game from the Hello Neighbor series of games. The archive with the prototype game launcher appeared on December 20, 2019 (Hello Guest), but was opened on January 5, 2020. This game was a part of an ARG that tinyBuild hos was held ted. People of the community have come together to solve this ARG, which on the Secret Neighbor Discord server and Twitter. On June 13, 2020, Alpha 1 (HG) released. Later on July 23, 2020 the game was renamed to Hello Neighbor 2, on the same day (HN2 Alpha 1) was realesed.

Hello Neighbor 2 is a Stealth Horror Game where you’re being stalked by a mysterious creature as you try to track down Mr. Peterson (The Neighbor) who has disappeared after the events of the first game. Play against an advanced, self-learning AI that tracks and adapts to your every move.

We play as reporter Quentin, who is investigating the case of missing Mr. Peterson. Traces lead him to a strange house in which the The Guest lives. Through binoculars, we see how he locks up the Neighbor (it turns out that the Neighbor and the Guest are 2 different people), and our task is to open the door to the attic and free Mr. Peterson.

It all depends on the actions of the player. And whatever he does, he will come to one final - he will open the attic and climb into it. And to open it, you need a key and a crowbar.

The key is in the Guest's room, above the boiler. The easiest way to pick it up is to wait for the fire to go out or you can also throw bottles in the fire.

To open the attic, you need to get into it. There are 3 ways to do this:

It all ends with Quentin entering the attic and grabbing the second Forest Protector costume. He runs out back and sees the Neighbor with a car (and the Man In The Hat will be standing in the distance under a lamppost). He walks out of the attic and sees the inscription: "You win?", This is where the Alpha ends.

At the moment, the plot of the prototype is unknown, but here is our theory on it, and it is as follows:

We play as a Watchman, in the Golden Apple Park where the death of Lucy Yi, who flew out of the rail and crashed to her death, occured. We must keep a watchful eye on the abandoned park, as Vandals climb over the fence and attempt to destroy the park's property, and they need to be driven out of the park. The more Vandals you drive out the more money that you earn at the end of the night. Unfortunately, a "Forest Protector" named the Guest, theorized to be Mr. Peterson, runs around the park in a suit with a long beak that hides his face and tries to scare Ike.

The game ends in a good or bad ending:

It is necessary, having fulfilled certain conditions, to activate the lever in a small booth near the rocket ride. After activating the lever, the attraction will begin to function and one of the rocket carts will break through the park’s wall. Behind the wall, there is the Weather Station, also known as "Mayak" by the fanbase, after which the window lights up after the destruction of the wall, and the prototype of the game ends.

For this ending, you need to continuously get caught over and over. Everytime you get caught more and more Bombs get placed on the wall that encases the Weather Station. Eventually, once you get caught enough, the bad ending will play. In the bad ending, the Guest blows up the wall with the Bombs resulting in the Weather Station being damaged and you and the Guest being injured. The prototype then abruptly sends you to the title screen.

It first began with tinyBuild posting 2 screenshots to their Twitter that depicted Theodore Peterson (better known as The Neighbor) on a camera. He is wearing his ordinary outfit. The other screenshot of a character holding a radar, also being recorded. It isn't confirmed who it is exactly since their face is mostly hidden.

There is a red text that either read "Distance: 4" or "Distance: 6", this presumably indicates how far away The Neighbor is.

On December 20, 2019, after the release of the Secret Neighbor Christmas Update, the message "/ HGP" appeared on the board in the room of the Neighbor. This code was used to access a secret website that is used to download HGP.

When you entered the website, which was found by ClassicJrb, there was a button on the site that gave the download. The file was password-protected, which could be obtained by activating the Mayak event and using the printer to get 20 different hexadecimal codes.

Later, on January 5, 2020, GreenHouseM13 used clues given by the creator of HN, Nikita, that he had put in his status. The clues lead to how the codes were supposed to be put together, and the end result looked like this:

The file contained a prototype launcher for the game. After launching the launcher, the game will be installed (about 600 MB in size). After the installation, you are able to play Hello Guest prototype.

Later, in January 2020, two videos were posted on the official Twitter: with a facial animation test for the Neighbor and the house of Neighbor.

In the Update Secret Neighbor, 1.0.9.9 was added a new secret in the form of a small video, which can be found in the trunk of the Man In The Hat's car by activating the secret. In the recording, Quentin can be seen grabbing a vandal by the hands. Then the angle changes to the Man in the Hat, who takes him somewhere.

The broadcast to the test pilot of the first episode of Hello Neighbor TV Show (Breaking and Entering) featured screenshots of the game, as well as a small gameplay piece.

At night, June 2, 2020, a small excerpt from the trailer for Hello Neighbor 2 was shown, as well as an image for Steam and the old game logo. According to Alex Nichiporchik, this is Hello Guest Alpha 1, which was released on June 6, 2020. On June 3, 2020, a game site was created on which screenshots of Hello Guest Alpha 1 were provided. On the day of release, for serious reasons, HG Alpha 1 was postponed to June 13, 2020. . The game trailer was released on the same day. For the period from June 6 to June 13, developers began to slowly merge HG Alpha 1 screenshots, and on June 10 a teaser for the game was even shown. HG Alpha 1 was available as a demo on Steam, the Windows 10 Store, and on the game’s official website (after the release of Hello Neighbor 2 Alpha 1, Hello Guest Alpha 1 will only be available at the last source listed here). After the release, two patches came out, correcting some errors.

On July 15, 2020 TinyBuild published a strange premiere preview which looked like an eye inside the grille shaped like a diamond on the red backgroud, Alex in the Hello Neighbor Discord Server said that this is the logo of the new studio Eerie Guest Studios in which will work redeemed by developers Dynamic Pixels and where they will work on Hello Neighbor 2. Later, on July 17, the premiere screen began to change, new screens appeared, with the presence of a raven and strange structures. Then, on the tinyBuild channel, access to the stream was removed. But still, you can follow the link to go to the premiere on the same channel on Youtube.

On July 23, 2020, the trailer for Hello Neighbor 2 was released, which caused a lot of questions among fans. It was also shown in the broadcast. There Alex also told that in fact Hello Guest - it's Hello Neighbor 2. On the same day, Alpha 1 was released.

Initially, the page had a black background, and on it - black letters, forming the word "tomorow" ("tomorrow"). Later, the black background and letters were replaced with a background similar to the texture of plywood. Even later on the page from above and below appeared wood, because of which the site resembled a wall board. Also appeared: a piece of wallpaper with the inscription "Observations" and some scrap of a photo of Quentin. Later, they added: another piece of wallpaper with the inscription "These guys are planning something"; sticker with the image of a crow; Hello Neighbor 2 logo, buttoned A screenshot taken from the game's official website; A screenshot taken from the trailer for the game; previously, nowhere used picture, on which the Neighbor with a pitchfork in his hand climbs the stairs, and just above it the shadow of the Guest.

It is not yet known who this diary site belongs to. 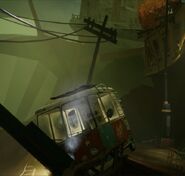 Man in the Hat first ever appearance

Leak given by Alex in the discord, looks like a cropped photo of some kind 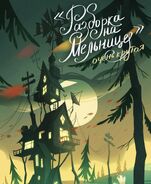 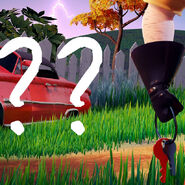 The Neighbor holding keys to somewhere