Imbir is an NPC character in Hello Neighbor 2.

Imbir is a cat with a knitted hat on its head, it is unknown who knitted her hat at this time.

Imbir first appeared in Hello Guest Alpha 1 on the balcony area of the panic room, and back then had no function other than just sitting there as an aesthetic.

Imbir appeared again in Hello Neighbor 2 Alpha 1 sitting on a bench near the lake. However in Patch 6, she now wanders the map occasionally stopping to look around the area.

Imbir returns in Hello Neighbor 2 Alpha 1.5 with the same functionality but is now wearing a Rudolph costume.

Prior to patch 6 of Hello Neighbor 2 Alpha 1 , Imbir just sat on a bench near one of the houses (same in Hello Guest Alpha 1 where you could find her sitting on the balcony in the panic room). However in patch 6, she was given proper behavior. Imbir now walks around the map, occasionally sitting to look around in an idle animation. Each time she moves, she randomly decides where to go. A small error was present in patch 6 where Imbir's speed didn't match up to the speed of her walking animation. When an unknown update released (presumably patch 7) Imbir moved slower, making her walk cycle sync better to her walking animation.

Imbir in a concept art

One of Imbir's locations after Patch 6 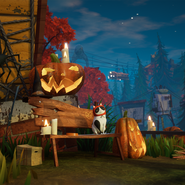 Imbir in one of the Shocktober Special teasers

Imbir in Rudolf costume - only in latest alpha 1.5 patch 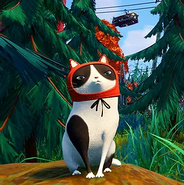 Imbir in a tree looking at 2 police officers
Add a photo to this gallery
Retrieved from "https://hello-neighbor.fandom.com/wiki/Imbir?oldid=29922"
Community content is available under CC-BY-SA unless otherwise noted.