Man in the Hat

Most of the fandom has given a name to this character. 'Smith'. Based on the current name we have and the old joke name 'Sombrero man.' SMITH stands for 'Sombrero Man in the Hat' The name itself created by Remington (Fear_Mayak) and RetroDiscoid/Diskette.

he likes hiding in cutsenes, teasers, trailers, in map during gameplay and more. you can find him by looking carefully.

The Man in the Hat is an unknown character in Hello Neighbor 2.

The Man in the Hat is a mysterious character, first seen in Secret Neighbor. He seems to be a minor antagonist of Hello Neighbor 2, if not a major one. He is always observing. You will be able to interact with him in-game, which was mentioned in the Hello Neighbor Showcase. [1]

He looks like a man in his forties, dressed in an outfit that hides most of his face.

He wears a dark blue sweater, a black vest, a beige trench coat with brown buttons, black striped pants, and black shoes. He wears a large dark brown hat. He also has a pair of pale yellow sunglasses that hide his eyes. His sweater hides his mouth. His nose has triangular shape. Underneath the mask, we can see that the model has his eyes closed all the time and has a "shaped" beard.

In the Hello Neighbor Showcase [2] he can be seen sitting on a bench, reading a newspaper with missing posters of Nicky, Aaron, and Mya. he puts up the newspaper when the police drive by.

At the beginning of the game when the character we chose is travelling to work, The Man in the Hat can be seen driving his car and passing by. He is more visible in Beatrix's story.

In gameplay, the Man in the Hat can be seen observing the main character from a distance. He appears both in the park and the shop until limited time.

At the end of the demo, after Quentin (or Beatrix) reach the ending spot, The Man in the Hat blinds the main character with his car's lights. After that he starts approaching our character and the screen cuts black.

in an extended version of the cutscene provided by WaneScottGames, the Man in the Hat tries to arrest the main character but stops when he notices the Guest hiding behind his car. He pulls out a spray bottle. In the files, there are more animations labeled "Alpha 2" at the start. In these animations, we can make out that the Man in the Hat wants to spray the Guest, but he fails to do it. They get into a fight, the Guest wins, and kidnaps the Player.

The Man in the Hat can be seen throughout the map in this game. He is standing on a funicular in the main map, watching the Player from a distance. In the ending scene of alpha 1 with neighbor's arrival, he can be seen under the pole with the phone. After the game has been completed, he can be seen in the background on the main menu.

Just like in alpha 1 he can be spotted standing on the funicular but this time he does not appear in the ending. He is also in the Guest house, under the roof, chillaxin'.

He appears on the bulletin board, in one of the photos after one of the game's patches. (February, 2019)

Then he appears as a secret character in the game and he hides among the bushes behind the fence.

He also appears in the recordings for the projector, where he grabs Quentin (HG Alpha 1 ending).

For the first time, he appears on the teaser with Mr. Peterson's House, where he just stands next to it.

He then appears in Hello Guest Alpha 1, where he appears during the entire game. First, he drives in the background in his car in the first cutscene. Then he watches the player the whole game, but these peeks are randomly generated and may vary. And in the last cutscene, he catches the player.

In Hello Neighbor 2 Alpha 1 he can be seen on one of the funiculars. He also appears in the finale of the game, where he stands near an electric pole with a phone, which is located near the house.

In Hello Neighbor 2 Alpha 1.5 the Man in the Hat returns standing on the funicular but he is not present in the ending of this build.

man in the hat render. 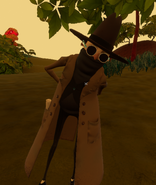 man in the hat in store map.

man in the hat outside Secret Neighbor map.

the man in the hat hiding in the Hello Neighbor 2 trailer.

Man in the hat in Hello Neighbor 2 teaser.

Hiding on bench.
Add a photo to this gallery
Retrieved from "https://hello-neighbor.fandom.com/wiki/Man_In_The_Hat?oldid=29992"
Community content is available under CC-BY-SA unless otherwise noted.