No (in the normal game)

The Mannequins are important objects in Hello Neighbor.

The Mannequin or Dummy, was first added in Alpha 1 and looked like a humanoid object that has a trunk with white fabric visible from the outside. The arms of the mannequin are made of wood. Also made of wood: the head and a low stance that replaces the legs. In Alpha 1, among the blockage leading to the third floor, you can find an armless mannequin. Alpha 1 also introduced the mannequin teacher.

In Alpha 2, the mannequin model is used as a child due to human proportions and a realistic look.

In Alpha 3, the mannequins lack arms.

In Alpha 4, the mannequin has changed a lot. Now it is slightly taller than Nicky Roth and Mr. Peterson. It looks like a tall object with very long arms made of metal and wood, a body, the body of which is made of wire, which can be seen from below. The mannequin, unlike the previous one, has wheels, but they do not affect physics in any way. The head has become smaller and narrower, sewn-in front, and the body has a patch. Also appeared another pose for mannequins. Also, starting with Alpha 4, in Fears, mannequins come to life. They begin to move, fulfill their role and can interfere with the protagonist. In the full game, they can be found in act 1 and 3. In act 1, 2 are in the basement. The mannequins in there serve no purpose. In act 3, there are 4 and they are required to get the toy rifle. You will need to bring all 4 and all 4 cakes in the birthday room and you will get the toy gun. They are also enemies to Nicky Roth in the fear levels that will reset you.

Mannequins have a cloth head and torso, a metal pole with four wheels, and very long, poseable arms. The joints appear to be metal, while the rest of the arms and the hands are wood.

They're just normal looking wooden mannequins with a white torso and a circular base. In Alpha 3, they don't have arms.

The mannequin teacher has been removed.

The mannequins' arms have been removed.

Now is are enemies with Nicky Roth in Fear School.

Fear Factory has been removed. The number of mannequins was reduced to four.

In the basement located two mannequins.

The location of one of the mannequins has changed.

In Alpha 1 there was a flaw with mannequins. If you take one and put it anywhere, then after a while it will slowly rise up. So it can go up in the air. And if at this time to climb on it, you can abruptly fly a considerable distance. The same property had:

Alpha 2 had the same mistakes, not counting lawnmowers. But in Alpha 3, the developers fixed it.

One of mannequins in the children room in Alpha 1.

The Neighbor holding a mannequin in Alpha 2.

A mannequin goes to the second floor in Alpha 2.

A mannequin in the attic (Alpha 2). 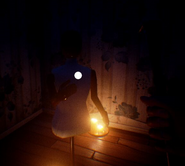 A mannequin in the basement. (Alpha 2).

Another mannequin in the basement (Alpha 2).

A mannequin in the room with a lift (Alpha 3).

Mannequin from Alpha 3 and in the game files.

The new kind of mannequin with bent hands (starting with Alpha 4).

A mannequin in the room with a lift (Alpha 4).

Mannequin with a trolley in Supermarket Fear.

Mannequin workers in fear of the factory.

A couple of mannequins on the official screenshot.

A mannequin in the hands of a player. 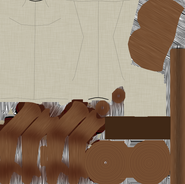 The Texture of the Previous Mannequin.

Part of the Mannequin in the box on the cover of the novel "Bad Blood". 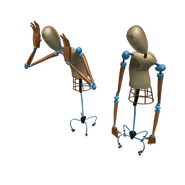 3D Model of the Mannequins
Add a photo to this gallery

Activation animation.
Add a photo to this gallery
Retrieved from "https://hello-neighbor.fandom.com/wiki/Mannequin?oldid=29257"
Community content is available under CC-BY-SA unless otherwise noted.