Mr. Peterson's House (Also known as The Neighbor's house) is the house across the road to Nicky Roth's house.

The pre-alpha version of the house doesn't have as many rooms as the alpha 1 house does. It only has 1 accessible

floor, with the staircase being blocked off with a wardrobe, cabinet, and couch. The basement/exit is only a small room beneath the staircase. There was no train or second floor implemented at the time. There were no invisible boundaries on the roof and you could walk on it freely if you managed to build on it. The house is much smaller than the Alpha 1 house.

The alpha 1 house has three floors, a train circling outside, and several rooms. There are now several invisible boundaries on parts of the outside of the house and one between the third floor and furniture blocking the staircase.

The basement does not have a visible room, but it comes with an ending now. The second story has a robotic shark guarding a pool of water leading to the second floor. Some rooms and features from the Pre-Alpha have been removed such as the glowing wall on the roof. There are also a few puzzles on the second floor. There is a room with 3 armchairs.

The Alpha 2 house has 2 floors and 8 rooms, 3 of which are on the second floor which can only be entered by turning off the trapdoor or by getting on the roof and breaking the window leading into the room with the crow. You can now enter the basement by obtaining a crowbar for the board and a keycard. However, when entering, you will soon be

greeted with an ending link to their website when trying to enter the first hall. There is a closet near his bedroom with a red lock, which is on the neighbor's belt. It leads to a room with a hospital bed to hide, and a crowbar and lockpick. The lockpick can be used to open the outdoor shed, which contains a gun and wrench. Upstairs, you can find many boxes and fireworks, along with a crow that will call for the neighbor when he/she (gender not specified) notices you. The room boarded by a single wooden plank contains the alphabet and crib from alpha 1 and a table with the keycard. His kitchen is quite ordinary, along with his bathroom. The living room contains the basement door, which is to the very right of the house. The bedroom has a high bed and a furnace that you currently cannot open.

When you are first "moving" into the neighbor's house, the hallway straight from the front is blocked off with items, and it's just an empty brick closet where the basement door belongs.

The Alpha 3 house has 3 accessible floors and is a mix of the Alpha 1 & 2 houses. There are many puzzles, and

the second floor onward is a labyrinth that you have to solve puzzles in. It has a train, multiple cantilevers, a larger

porch and the edition of bay windows. It also introduces a broken elevator in which you have to climb the rail that a shaft would be connected to. It also has a massive chimney and a wind turbine that seems to be rushed and handmade.

His is the fifth house next door. It can be seen in Alpha 4 - in the latest Alpha version of the game. The developers have changed a lot after Alpha 3. Outside the house edit Neighbor's house is huge and some places are reinforced with wooden beams for reliability. Boards have different colors. Also noticeable

is a large container hanging on beams attached to the house. Climbing into it, there is seen an orange door closed by an orange lock. After opening, the player will fall into the Fear of Darkness. Almost the whole neighbor's house consists of cubes, and therefore you can notice many unnatural moments near the house: Wallpaper of the house is visible from the outside, the roof tiles are directed at an unnatural angle, the textures look very not organically (Many of them are stretched, compressed, etc.). At the house, rails come out of different places, and also a large windmill is visible above. Nearby is the car of the Neighbor, inaccurately parked on the fence and with the headlights on. Opposite the house in front of the fence are trash bins with garbage.

The windmill is also changed. The Neighbor's house is less realistic than Alpha 4 and Beta 1-2.

This Neighbor's house is the smallest in Release. It has only 2 floors and 8 rooms. The Neighbor's House in Act 1 is made of blue wooden boards, white wood, and brown tiles. The house has a lift on the left and a unique red window, which differs

from other windows only in color. The roof has a large hole leading to the nursery. The house also has a fake wall that can be pushed back with the yellow switch. The house has a backyard gate leading to the roof. The house near the bedroom has a small blockage, consisting of a chest of drawers, a bedside table, and huge shelving.

Unlike Act 1, the house became 2 floors larger and got more rooms. Pipes are located throughout the house, which is not very natural. A very high fence appeared with barbed wire at the top so that Nicky Roth (the main character) could not climb over it to his home. The house, unlike the previous one, is. Made not only of blue boards and white wood but also of yellow, red and burgundy boards. The house acquired another staircase, which was in place of the blockage near the house from Act 1.

A lot of locked doors appeared at the house (Some of them were simply propped by chairs). Also, more boarded up windows appeared initially.

In Act 3, the neighbor house is the Beta 3 house. It has six floors, and each floor has different rooms. On the first floor, you can find one minigame (Fear_School), on the third floor you can find Fear_Supermarket, and you can find Fear_Darkness in the hanging container beside the house. In this house has

This is the place where Hide & Seek events take place. In the imagination of the children of the Neighbor, he looks different (for example, like a savannah).

Secret Neighbor's Neighbor's house is large enough, it has 5 floors and 21 rooms (not including the basement and several closets). The house has several balconies. The whole house is surrounded by a high fence.

The house also changed with each version:

In the Pre-Alpha versions, there were completely different wallpapers that will no longer be in other versions of the

game, there were a lot of windows at home;

In Christmas Alpha, the house was designed for the new year (Wallpaper changed, a Christmas tree appeared in the hall, etc.);

In Easter Alpha, the usual wallpaper for the house appeared, and also removed all the New Year that was with Christmas Alpha;

In Beta, many windows from different rooms were removed from the house.

In the Release, the Neighbor's house was greatly transformed: The house has additional decorative windows; The passage to the roof has become more difficult (Instead of the rack, “bridges” from the boards appeared); A high tower appeared and much more. The fence around the house became stone.

In the Christmas update of the Release, major changes took place near the house: The hole in the dressing room was boarded up with boards; The tower fell from the roof and blocks the passage from the right side of the house; Two attic windows were boarded up with boards; The house received a Christmas decoration (Wallpaper, garlands, Christmas trees, etc.); Changed the location of one of the grilles; One part of the roof is blocked by a grill and much more.

Outside, it is very similar to the house from the Full Game, but it has some differences:

Since this is not a game, you can not inspect the house yourself. At the moment, the following rooms can be distinguished:

There are a few early drafts of The Neighbor's house.

Four-story house with white walls and a brown roof. On the right side is a garage. There are two chimneys on the roof.

It looks like a five-story house in blue with a brown roof. Some floors of the house protrude beyond the main part and adhere to beams. To the left of the main entrance is a garage. On the roof, there is a pipe and antenna. In front of the house, there is a mailbox and a trash can.

It looks like a house from Alpha 1, but it looks a bit different. 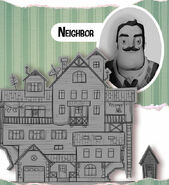 It is a huge fourteen-story house. It is the tallest house in Hello Nighbor. Below it is only eight-story houses from Act 3, Alpha 4 - Beta 2 and Beta 3. At the level of the sixth and seventh floor, there are rails. Perhaps this is their first appearance.

This location can be accessed by entering the command "open Neighbor_3" in the console. The location is a very large structure, in which there are still not added and already added objects. Outside consists of blue boards. Inside the house has many rooms that do not have textures.

Retrieved from "https://hello-neighbor.fandom.com/wiki/Mr._Peterson%27s_House?oldid=16349"
Community content is available under CC-BY-SA unless otherwise noted.