Nicky Roth, also commonly known as The Player, is one of the two main characters in Hello Neighbor. He is the only playable character in the main game (if not including the game's Hide and Seek Prequel).

Nicky Roth lived with his father (Jay) and his mother (Luanne) in Charleston, but they later moved to Raven Brooks. Theodore allowed Nicky to see Aaron Peterson and make friends. Together they broke locks, hooliganized, and just walked in the street. In the main square, Nicky became friends with Enzo Esposito but later stopped communicating with him. After the tragedy in the family of the Neighbor, he and Aaron also stopped communicating.

Young Nicky Roth chases a rubber ball down Friendly Court. He then notices Mr. Peterson hiding someone (maybe Aaron) in his basement. Nicky walks up to the window, and the Neighbor locks the door of the Cellar on a Red Key. Theodore sees Nicky, attacks him and takes him to the house. Nicky becomes curious that what is happening in Mr. Peterson's basement. He breaks through Aaron’s window and searches the house. He finds the red key and sneaks into the basement, which he cannot turn back once he enters. Nicky sees Aaron at the end of the long corridor and Theodore’s office. Aaron wanted to stay in the basement, so Nicky did all of this for nothing. The neighbor finds him and locks him in the basement.

Neighbor's son, Aaron opens the door - the exit from the basement and Nicky from there escapes. Nicky sees that The Neighbor managed to build a large house and fenced so large fence that it is impossible to get through it for Nicky Roth. He finds a crowbar, digs the boards and escapes. (Or finds a red key and opens the gate) (Perhaps jumps on the trampoline and flies over the fence). After this escape, Nicky begins to be very much afraid of Theodore.

Nicky wakes up from a nightmare. Many years have passed, Nicky has grown up and lives in a big city. And then there's a knock at the door. In the slot for letters flies a letter of eviction. Nicky is very upset and remembers that he has another house. He collects things and goes by car to his old house. Upon arrival, he sees the ruins of a neighbor's house and remembers Theodore. Nicky gets uncomfortable, and he comes home. After that, he lies down on the couch and falls asleep. He's having a dream where The last neighbor came back and locked someone in the basement again. He was able to open the basement, but he couldn't get through it. To do this, he needs to go through the orange doors behind which are his childhood fears: school, supermarket, and darkness. He overcomes his fears by simultaneously gaining some additional abilities, such as resistance to the Neighbor, the ability to become invisible and double jump.

Nicky has solved a lot of puzzles, and opening the basement he finds himself in a mysterious place, where there is a huge Neighbor. Nicky stuns and forces him to bend over to get into the house that Theodore holds on his back, after which, the young man gets into the room with the newspapers about the Missing Children. Nicky enters the door and finds himself in a big house, where he sees himself as a child and his main fear - the fear of the Neighbor. He embodied this fear. To overcome this fear, he had to protect the little one from The Thing. The longer Nicky defended, the older he got. Nicky defeated The Thing, went through the door and woke up. After that sleep, he overcame his fear of Theodore. Nicky puts his belongings in the house, and the game is over.

On the appearance it can be said that he has thin legs with shoes, dressed in a T-shirt. He has a short haircut.

The model is no different from the Prototype, but Nicky often keeps his hands on the sides unlike the previous version when standing still. The model has an animation of the jump. Now Nicky's shadow has a more fuzzy outline.

Nicky Roth appears to be a Disney-Pixar styled young man who wears a red and white t-shirt worn underneath a light brown plaid vest. He wears blue skinny jeans rolled up below the knees, a pair of white ankle socks, red and white sneakers, as well as a simple watch worn on his left wrist. He always has a tired expression and has dark brown spiked hair and buzz cut facial hair. He's taller than Mr. Peterson and has a slim figure.

During the entirety of Act 1, Nicky first appears as his younger child self, wearing a light blue shirt that had a shark printed on it, shorts with a golden/yellow apple, and a baseball cap that is not seen at all in the second act.

His appearance has not changed much, except that now the cap is missing, revealing his hairstyle. His clothes are torn in some places, and the left sneaker is not at all, and his knees are covered with abrasions and scratches. He also has bandages wrapped around his right hand.

When fully grown in Act 3, he still has some features as his younger self. His hair is spiked up and has buzz shaved facial hair. He wears a white shirt with long red sleeves, a brownish flannel, blue jeans that are rolled up just below the knee, and red sneakers. Same as Alpha 2.

Nicky is a cynical man, sometimes showing cynicism by nearly clenching his fist. In contrast to his younger self, who befriended Aaron and also was a non-cynical kid who was happy go lucky. His Cynical attitude and crippled physique (especially his expression) have been implied to originate from how the neighbor's cynicism would always show and bloom. Nicky is known to have dyslexia, schizophrenia or kleptomania, as he steals without knowing or any problem and every word is flipped, messed up or are not even words. This isn’t true however, since he reads news articles and books with ease. The letters are just how the developers made the game.

Roth also seems to have a risk-taking personality as he has no problem with breaking the law as he frequently trespasses on Mr. Peterson's property as well as breaking and entering Mr. Peterson's house. He also seems fine taking anything that is not considered his stuff. He usually stalks what he does too, and has a record of Peterson’s daily schedule.

Nicky seems to have no problem taking risks, as the player can direct him to continuously break into Mr. Peterson's house. It is possible that he has been traumatized from the events of Act 2, as he sees a shadowy figure before Act 3 near/at Mr. Peterson's burnt home.

With Pre-Alpha itself, the hero can interact with almost all the items in the game and take them. In Pre-Alpha, the player can also look in either direction to see if there is The Neighbor. In subsequent versions, this ability was removed due to the fact that many players looked to the side and went through the textures, so they could easily remove the chair propping the door. In Alpha 4, after passing two Fears, he gets additional abilities: a double jump and the opportunity to escape from the hands of the Neighbor when he caught him. In Beta 1-3, the abilities after passing nightmares remain the same, it was originally thought that after passing the Fear Factory, the hero increases the force of the throw, but in Beta 3 and Release it is available from the beginning and in all acts. Also there is the ability to become invisible (on Ctrl) after passing The Fear Supermarket. However, it does not work during The Neighbor's pursuit of the player.

In the novel Hello Neighbor: The Missing Pieces several things are revealed about Nicky that cannot be discerned through the game. As an 8th grader he is quite intelligent. He is good at science, just like his mom. He can craft gadgets out of junk for pranks which he and Aaron go around pulling on various people who have done bad things like Mr. Quinn who walks his dog across the Peterson's front lawn and never picks up the dog's poop or Mrs. Tillman, a store owner who is too haughty for her own good which the latter gets them into big trouble. At the start of the novel it was made prevalent that he recently took up the hobby of picking locks which was what initially brought Nicky and Aaron to become friends. Mentioned several times throughout the story, Nicky and his family are Jewish, but he believes that a superior alien race is their overlord and is even set on convincing rabbis of this idea. Aaron mistakes his alien obsession as it actually being part of Judaism until Nicky clarifies. 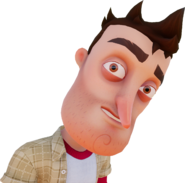 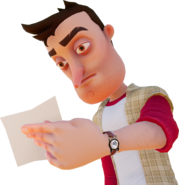 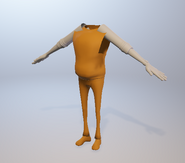 The DevGam Player only ever seen in first person. 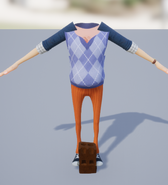 The Pre Alpha/Prototype Appearance Of Nicky.

Nicky Roth under the map (Alpha 2).
Add a photo to this gallery

Nicky in the TV Show (Child).

Nicky with the Children.
Add a photo to this gallery
Retrieved from "https://hello-neighbor.fandom.com/wiki/Nicky_Roth?oldid=20742"
Community content is available under CC-BY-SA unless otherwise noted.