Unknown, possibly St. Louis, Missouri, the city Raven Brooks is a suburb of

Impact on the town

Unknown
Nicky Roth's Apartment is a location in Hello Neighbor.

After much torment, the main character moved to live in this apartment. But even after moving, he had nightmares, of Mr. Peterson. Once, there was a knock on his door. A letter flies through the door slit into the room.

The main character finds out about the sad news indicated in the letter. The fact is that the protagonist is evicted from his apartment due to non-payment, and therefore he must leave the apartment. The main character remembered his old house in which he lived as a child, but he did not want to return. But he has no choice. He collects his things in a suitcase and leaves. Arriving in the suburbs of Raven Brooks in his yellow car, the player noticed his house, but already a little damaged while Mr. Peterson's House is completely in ruins. He goes inside of his house, but then he becomes uneasy and he goes to bed ...

At first, it was in cut scenes in Alpha 4. Then it was added to Beta 1, as a training location. It looks like an apartment with two rooms (main room and kitchen). You can find in it: a telephone, a mug, a sofa, a clock, a wardrobe, a table, a chair, a TV, binoculars, paintings, a stove, a sink, and a refrigerator. In Beta 3, the apartment was finalized. Now there are still objects such as a can of soda, a radio, apples, a banana, a player, a cassette, milk, a garbage bag, a bag of flour, a cutting board, a kettle, and a frying pan. In the release, they added a bathroom to the apartment, as well as items such as books, a floor lamp, a tape recorder, a bathtub, a toilet bowl, a bucket, a mop. The suitcase was removed from the closet. The outside of the apartment is covered with bricks.

View of the city.

View from the window (Before Release). 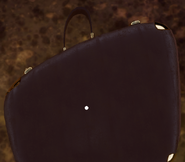 The main character's suitcase which is present in the cutscene.

Concept Art of the apartment.

All of the Objects in the apartment (Beta 3).

Apartment in Release. The main character took the letter.

Add a photo to this gallery
Retrieved from "https://hello-neighbor.fandom.com/wiki/Nicky_Roth%27s_Apartment?oldid=29441"
Community content is available under CC-BY-SA unless otherwise noted.