In Hello Neighbor 2: orange cap; green jacket; blue jeans; black high tops, one of them is untied; black glasses; green shirt with a fruit pattern; "PRESS" tag with his name on it; he is also carrying an old voice recorder, strapped to a belt that he is wearing.

He can run fast, climb and vault over obstacles.

He rides a bike from place to place and also has a driving license.

Likely to know of the weather station on the mountain (Mayak-1), but he may not know what it exactly does.

Quentin is one of the protagonists of Hello Neighbor 2.

Quentin is a journalist. His goal is to find the secrets of Mr. Peterson. Quentin thinks Theodore is up to something, but everyone else is too scared to uncover it, so he must do it himself.

In Hello Guest Alpha 1 and Hello Neighbor 2 Alpha 1, Quentin has an orange bicycle helmet. To go with this, he has yellow knee pads with black straps. He has black boots and green pants. He has a teal shirt covered in images of tropical fruit with white sleeves. Over the shirt is a blue guard's jacket, with a badge on it and a zipper. He has a brown watch and a bandage on his left arm. His finger also has a bandage on it. Quentin also has a pair of black glasses. His eyes are brown, along with his hair, and he has a mustache. His hands are cut and beaten-up looking, and there is a bandage and cut on his face. His beard is badly shaven.

In Hello Neighbor 2 Alpha 1.5, Quentin's clothes have changed and his hands are less bony. His jacket is now green and has no badge, and over the jacket is a strap with a recorder attached to it, which has a microphone. His knee pads are gone, and his boots have been replaced with black and white sneakers. His pants are now blue instead of green. His helmet has been replaced with a backwards orange baseball cap. His watch is now green and he has a name tag hanging from his neck. The rest is the same.

From what we can see, Quentin seems to be clumsy in the Hello Guest Alpha. He kicks away a sign he accidentally knocks down and slams his finger on the guardhouse door. He sprays himself with the Space Spray while Man in the Hat and the Guest are fighting.

Good Ending: A wall concealing Mayak is destroyed by an amusement park ride, revealing it. A light turns on.

Bad Ending: The Guest blows up Mayak with bombs.

He arrives on his bicycle to the Golden Apple Amusement Park to work as a security guard. When he approaches the park complex, he hears a strange sound. He looks around but sees only a statue of the Guest and shudders. Then he goes to the metal door and tries to correct the rickety plate “Road closed”, but it falls. He kicks the sign to the side, opens the door, and goes to the park. When he enters the security building, he picks up the telephone that rang on the desk to inform his boss that he has arrived at the park. As soon as he goes outside, he sees the arm falling off of the giant Guest statue and sees lightning flashing in the distance.

Quentin arrives before Mr. Peterson's abandoned house in his van. As he looks at the house he sees the Guest locking up the door leading to the attic and then go inside the house. Quentin assumes Theodore Peterson is in there. After that, Quentin tries to reach the attic.

He finds a costume of what seems to be Guest Kid from Alpha 1.5 and sees Theodore Peterson outside with his car. The ending screen says "You Win?"

At the beginning, Quentin is seen sitting in his van (Wayron Croobs Rimmor Van) looking at a missing poster of Mr. Peterson. Shortly after he hears a rumble in Peterson's house. He takes out a monitor connected to a camera which he hid in the trash to spy on the Guest. Looking at the monitor Quentin sees the Guest burning trash in a furnace. Shortly after, he throws the camera into the furnace which causes it to break. Quentin tries to spot the Guest by looking out the window of his van when suddenly three kids in costumes trick or tricking arrive before the house. One wearing a bird costume, the other with a pumpkin on their head and the third dressed up as an alien. One of the kids rings the bell. The Guest notices the noise and sneaks up behind the kids. Suddenly, a missing poster of the three children blown by the wind gets stuck to the window of the van, blocking the view. When the poster disappears Quentin sees the Guest with a sack on his back. Soon after he takes the sack into the attic and locks the door.

Once Quentin finds 5 pieces of candy and gets into the attic, he sees that the Alien kid and Pumpkin kid are fake and made of straw, and that the Guest costume kid becomes the Neighbor (keep in mind this is most likely imaginary). The Neighbor bangs on the door and it cuts to Quentin turning off his computer, yawning. Someone knocks on his door. Quentin grabs the candy bucket on his desk and walks to the door, but the person behind the door knocks more aggressively and the ending screen says "How is your weather?"

Quentin is able to scare away the Vandals. Quentin has the ability to put generators lights and go down with ropes using a monitor to see through cameras. He can also use the Fire extinguisher to put out the fire made by vandals and fly.

In Hello Neighbor 2 Quentin is able to climb and vault over obstacles without issues. He's able to move quietly without making any noise while crouching. He can use a monitor and cameras to spy on the Guest. Quentin is also able to use a fire extinguisher to float.

Quentin Being Pointed by a Flashlight.

Quentin In the keyart.

A more finished model of Quentin in one of the developer screenshots.

A updated model of Quentin as found in the secret video.

Quentin In the paycheck place 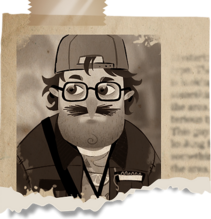 Driving.
Add a photo to this gallery

transparent
Add a photo to this gallery

Retrieved from "https://hello-neighbor.fandom.com/wiki/Quentin?oldid=29411"
Community content is available under CC-BY-SA unless otherwise noted.