Helps Mya to get out if she is stuck (Hide & Seek)

Helps the children to find the keys (Secret Neighbor)

Steals the key in Alpha 2

The first time a raven appeared having to do with the game was in the most well-known concept art of the Neighbor holding a shovel and standing before a grave. A raven is obviously seen standing on its edge. Another one also appears perched on a branch in the background. Two also appear in the concept art of the Neighbor standing in his kitchen holding a butcher knife, staring at whatever he is cutting.

There are several raven paintings in Neighbor's house.

At the beginning of the game, when the main character moves to his new house, the raven is seen to have stolen the house key from under a stone. In order for the raven to release the key from its beak, it is necessary to throw a stone at it.

In the main game, the raven sits in the attic in a cage and croaks loudly if he sees the player attracting the attention of the Neighbor.

The same as in Alpha 1.5, but now Raven has sounds and it disappears after the main character throws a stone at him.

Walking on the entry table in the initial cutscene.

It is located in the initial cut-scene in two places: on a box near garbage bins and on a shopping cart near the entry table, with spread wings.

Crows are at the beginning of Act 3 on and under the entry table. You can also find in a dream with ads: one on the fence, and the other on the shovel. Another raven is in the main game menu in the closet.

Crows are in every phase of Hide & Seek, if you click on the “I'm stuck” button, the raven will help you get out.

Crows help children by appearing in rooms where keys are (even if keys of this color are already needed). Starting with Halloween Alpha, they will only do this if fewer than three children are left.

Crows appear to be purple, they look passive like usual however they seem to attack anyone insight if they have red eyes.

Cardboard sign at the panic room, not in the sky though.

Seen in the sky, Heard faintly usually while wearing headphones.

Seen as the same statue in HGP, Also in the sky at afternoon and heard all day. Also at the ground to help you find objects. 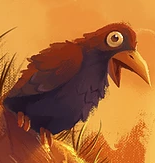 The raven as seen in the grave concept art. 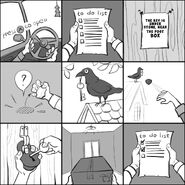 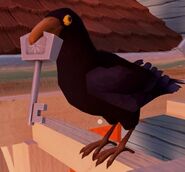 The Crow with a key in Alpha 2.

The Crow in HGP 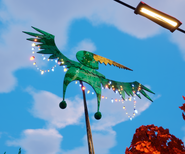 Crows with red eyes from the TV Show 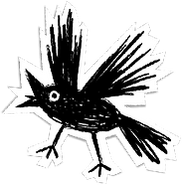 The raven sticker from the diary site 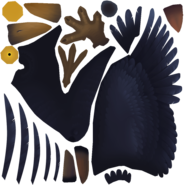 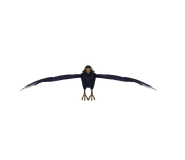 Model of the Raven
Add a photo to this gallery
Retrieved from "https://hello-neighbor.fandom.com/wiki/Raven?oldid=21381"
Community content is available under CC-BY-SA unless otherwise noted.