Raven Brooks is a small town in which Hello Neighbor, Hello Neighbor: Hide & Seek and Hello Neighbor 2 take place. Only a small part of it is used, enclosed by an invisible wall, in the center, so the rest of the world is not well drawn, although it is interesting to study. You can get there without using external programs, using the teleport room. The sign reads ”Calwom Oot Wayron Croobs” which means "Welcome To Raven Brooks". Raven Brooks was the home town to both Theodore Peterson and Nicky Roth. In Hello Neighbor 2, all of Raven Brooks is explorable.

Raven Brooks is a very green town, with grass covering a majority of the land, and a very large abundance of trees all over the town. There is also a very large lake with boats on the surface, and a drainage system on the side. The town has a lot of features that would be expected of a typical town, including a water tower, a church and graveyard, a school, a supermarket with parking lot, a hospital, a factory and numerous residential houses, some of which have cars parked outside. Most importantly however, the town holds the Roth and Peterson households, the former of which houses the Protagonist (and presumably his parents in Act 1, though they are never seen), and the latter of which houses only one resident in-game. A T-shaped road, which runs between the houses of Nicky Roth and Mr. Peterson, is also present, along with numerous other roads. A skyline silhouette can be seen in the distance if Nicky looks down the road.

Raven Brooks has uneven terrain, some buildings, and the water tower. In particular, the buildings are tilted at an unnatural angle, from which they could easily collapse, technically speaking. The origin of the name is also not entirely clear, “ravens” can be explained by a large number of ravens.

As explained before, Raven Brooks is the place where most of Hello Neighbor takes place. Raven Brooks has been confirmed to take place in Missouri, due to the first book (Hello Neighbor: Missing Pieces) confirming this. The town from the alphas, betas and full game all have different designs. There is a variety of buildings in Raven Brooks.

In Alpha 1, the design of the town was very simple. There are a few trees and houses around it. It is the same in Pre-Alpha except for one thing: a burning house.

In Alpha 2, the design of the town became more complicated than Pre-Alpha and Alpha 1. There are a few extra locations in the town such as a lake and a graveyard.

In Alpha 3, the town is already bigger and larger than in Alpha 2. There are many locations in the town. Like a Supermarket, School and Gas Station to name a few. But the graphics of Raven Brooks is still less than in Alpha 4, Beta, and the full game.

In Alpha 4, the design of the town is still the same as Alpha 3, but the graphics of the town are better than the alphas before.

In the full game, the design is the same as the Alpha 4 design, but there are more locations added in the release. Plus, there is a missing poster assemble in the trees around the town.

A player appears in the cemetery after the script room passes. There are many graves, as well as on one side there is a church, and on the other the guardhouse. On one of the tombstones, you can see a photo with a silhouette of a woman. Previously, the cemetery was located behind the house of the Neighbor.

The lake is not a structure, but it is interesting to explore. It is a large space near the factory covered with water. You can walk on the water as if on a hard surface, but at the same time, there will be a splash of water. It has a lot of interesting objects.

The building has several chimneys, and several pipes going underground. The building itself is blue and has many windows, some of which glow in the dark. It is unknown if this building is a factory or a power station.

This is a red-burgundy building with a green roof, near which several cars are parked. Above the entrance is written in broken English "High School of Raven Brooks." On the sidewall, it says "luck you" (good luck to you).

The building with the turret behind, the top is the inscription "Lopice" - "Polise" (Police). Near the entrance is attached an announcement about the missing children.

It's not far from Neighbor's house. In the fashion crossover, Hello Bendy the top of the tower is replaced by the head of Ink Bendy.

A large building formerly called the "Golden Apple" supermarket, but now the name is missing. There are a lot of cars and a couple of poles near it. Above the entrance is written "Puserkarmet" which is a broken English word "Supermarket" (Supermarket). On the sides of the windows is written: "Lace", which may be a modified word "Sale" (Discounts).

A small building with a bunch of cars and a couple of poles nearby. There are two entrances. A sign above the main entrance reads "Sogtipal", presumably "Hospital".

Neighbor's habitat. Act 1 is a small two-story house. Act 2 adds a third floor, pipes and some rooms. In Act 3 during the move is almost completely destroyed, but becomes huge in the nightmare of Nicky Roth.

It is a reference to a person with the pseudonym GreenHouseM13, the creator of cheats for Hello Neighbor. Located at the cemetery.

The home of Nicky Roth. In all acts it looks like a two-story house. In Act 3, after Nicky Roth had just arrived at his house he became quite shabby, many Objects are gone.

They perform only the role of decoration. Scattered all over the city.

Other items outside the map 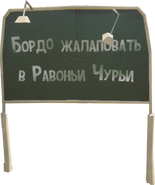 The sign to the entrance to the town (Alpha 3).

Golden Apple Amusement Park
Add a photo to this gallery
Retrieved from "https://hello-neighbor.fandom.com/wiki/Raven_Brooks?oldid=29378"
Community content is available under CC-BY-SA unless otherwise noted.