Attacks the player with it's beartrap jaw.

Can be stopped by freezing the water it's in. (Alpha 1)

The Robo Shark is a secondary enemy encountered in the first Alpha and final release of Hello Neighbor in Act 2. It patrols the second floor of the Neighbor's house searching for intruders in the water, including the Protagonist. When the latter steps into the water, the shark starts chasing him. Upon contact with it while the water is unfrozen results in being caught, practically like with the Neighbor.

The shark appears to be robotic when looking at it from the floor underneath, it also appears to have a bear trap on its face. You can also see he's a robot when you pick him up after draining the water.

As to be expected, the shark is hostile to the protagonist but not hostile to the Neighbor. Should the Neighbor go upstairs to chase the player, he will pause atop the staircase for a couple of seconds, then dart across the water without being affected by the shark. The latter can be frozen by turning the heat off in the furnace room, allowing a (practically) freeway to the second floor. This is an easy way to bypass the Shark completely, but it's recommended to enter the furnace room after getting in the house a differing way, to prevent the Neighbor from finding out the Protagonist got in through the boiler room and preventing entry from the outside.

As of the Alpha 4 build, the shark can now be found in the lake by the factory, although, it is no longer active. In the same build, it is also possible to find the Shark on the top shelf of the "Fear Darkness" level.

In the final build of Hello Neighbor, the shark is brought back, though you can drain the room leaving it harmless and you can also pick it up. In the final release, it is also shown that the shark is mechanical as was speculated in past updates to the game. Also, by touching the glitched "Unreal Engine Missing Script" sign, you can be teleported to the outside world and, in the lake by the factory, the full shark can be found. This way and by picking it up are the ONLY ways to see the full shark.

In Alpha 1, it could be found in the Flooded Room, quickly swimming around in circles and patrolling the room. If the player approached the water, it would swim around more erratically and pay special attention to their location. If the player went in the water, it would instantly turn around and make a beeline for them, and should it catch them, it would send them out of the Neighbor's house. The player needed to turn off the furnace in order to freeze the water, which would render the Shark immobile and unable to capture the player.

The Shark also appeared between Alpha 4 and Beta 3, but only as a static object in the Fear Supermarket area or outside the map.

In the final game, the Shark patrols the flooded room and guards the shovel. It was given a redesign and received a sound for movement and an alarm sound for charging towards the player. Its behavior remains identical to its original incarnation. The player is required to drain the room, which causes the Shark to lie harmlessly on the floor, at which point it can be picked up like a normal item. If the player refills the room with the nearby tap and drops the Shark into the water, it will once again begin patrolling.

The Shark in Water.

Image of the full '"Shark". 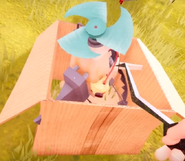 The Shark in the Box.
Retrieved from "https://hello-neighbor.fandom.com/wiki/Robo_Shark?oldid=20860"
Community content is available under CC-BY-SA unless otherwise noted.