ragdolls if object gets thrown at him

Vandals are the minor antagonists of Hello Neighbor 2.

They look like teenagers in black jackets with a blade, and a patch with the inscription I am bad “MAI DAB” dressed in tight jeans and red sneakers. Behind him is a backpack with the inscription KILLER warped in English. And the satanic pentagram. The hood is tightened around the face and only the nose sticks out. In the Amusement Park, they go with their heads bowed and wearing white masks.

In older versions, the vandals appeared as simple 3D humanoids, with low-poly bodies and blocky feet and hands. They had luminous eyes similar to The Thing, but theirs were yellow and angled. Other than this, they had no texture.

Vandals are a minor antagonist in this game. They will attack various objects, kicking, etc. if left attacking, they will eventually set objects on fire. When approached, they run away and climb over a stone fence. They may appear in large numbers. Unlike The Guest, they run away when caught, and also do not catch or attack the player. The player can attack them throwing objects at them when they are climbing a wall, and sometimes they will put their hands up. In test map exclusively, if the player has their flashlight out, the vandals will follow. If they are successfully trapped somewhere, they will stay there all the shift, but if the player stops to look at them, they'll run away. 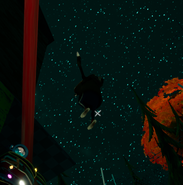 A Vandal climbing up a wall 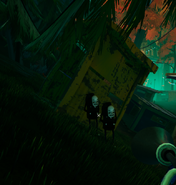 The 2nd version that can be seen at the Store.

A Vandal at the Store (2nd version)

A Vandal at the Counter (2nd Version)

A Vandal when that has been caught

a Vandal after fall by a Rope

A Mask of a vandal seen in the announcement trailer

Vandals breaking a kiosk
Add a photo to this gallery
Retrieved from "https://hello-neighbor.fandom.com/wiki/Vandals?oldid=29682"
Community content is available under CC-BY-SA unless otherwise noted.